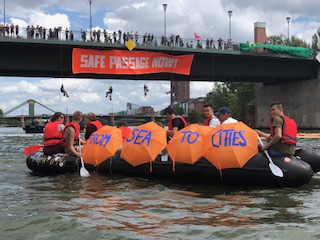 Dear friends,
the Alarm Phone is a hotline for people in distress at sea and yesterday morning we were once again relieved about a small success. We were able to contribute to the rescue of 80 people on Ocean Viking, the new rescue ship of SOS Mediterranee and Doctors Without Borders. Already one week before 123 people were rescued in cooperation with the Spanish rescue ship Open Arms. The inflatable boats could be found after we had been able to determine and pass on the GPS position via our emergency telephone. Our shift teams were busy all night to empower the people on sea, to calm them down and to enable them to provide their localisation. And it was a bit of luck that the so-called Libyan coast guard did not appear – as it happens almost daily at the moment – and transports the people back to the torture camps in Libya.
Yesterday afternoon, after the gladness of the successful rescue on the Ocean Viking, we witnessed when 90 people on a boat see appearing on the horizon the Libyan militias, equipped by the EU. Again and again they had begged us on the phone to make sure that this did not happen. They said that although the condition on the boat was critical, several pregnant women had to vomit a lot and they had a seriously injured person on board, everything was bearable if they were only not brought back to the torture camps in Libya at the end. After the last telephone call, the contact broke off. 90 people, including 15 children and 10 women, 5 of whom are pregnant, are now back in the camps of the externalised torturers of the European Union.
The Mediterranean is and remains a highly contested area. With all violence – and this in the truest sense of the word – the EU continues to rearm its border regime to keep refugees and migrants away from its coasts. Since long they have transformed the central Mediterranean into a propper death zone. The military and Frontex are using planes and drones to track down the small boats from the air in order to report their locations to the Libyan militias ,who have been trained and equipped beforehand. This practice of push backs is illegal, but boats should be intercepted at all costs and people are to be deterred.  This is by no means just the policy of the far-right Italian Minister of the Interior, Salvini. The collaboration with Libyan militias was initiated by his Social Democratic predecessor Minniti, and this brutal and human rights violation is not least covered by the german Interior Minister Seehofer. It is an axis of shame that is responsible for the ongoing death at sea. But we promise, and that is why we are here today: we will not give up until these illegal pushbacks and murders by drowning come to an end. We will continue to fight alongside the refugees and migrants until the barbaric border regime collapses and all people can exercise their right to protection and freedom of movement.
It is remarkable: despite and against all the repression of the last two years, despite and against the continued criminalisation of sea rescue, five ships of sea rescue organisations are again in operation today. Ocean Viking and Open Arms have already been mentioned. In addition there are Alan Kurdi, See Watch and the Italian rescue ship Mare Jonio. Together with the two small aircraft Moonbird and Colibri as well as with our Alarm Phone we try to form a first rescue chain in the Mediterranean Sea. The aim is to build corridors of solidarity that oppose the murderous exclusion policy of the EU and the nation states in a practical and concrete way. From the sea to the cities, we want and must develop infrastructures that follow the persistence of migratory movements: for a Europe of welcome, for the right to come and stay.
From the sea to the cities: here lies the central importance of the sea bridge movement. To take up and support the resistance and the struggles of the refugees and migrants at the external borders by exerting pressure here in the cities for the implementation of municipal reception: for an open Europe from below. The Open Arms ship has been waiting for a safe haven between Lampedusa and Malta for almost ten days. Among those rescued are women on board who were raped and tortured in Libya. Ocean Viking will also soon be standing at closed gates with the 80 rescued yesterday. We demand that the ports be opened immediately, that the refugees and those rescued be taken over by the many cities that want to welcome them.
From Palermo to Frankfurt, from Naples to Marburg, from Valetta to Darmstadt: we want and must put pressure on Hessen government to do something. That cities such as Marburg and Darmstadt, which are ready for admission, can also implement this. As the Brandenburg Landtag recently said so aptly in a resolution on the reception of refugees: „This is not a question of generosity, but a minimum of humanity“. The Hessian government should take this as an example when deciding on a state reception programme in the coming weeks.
We want an open society. The society of the many. Solidarity not division. Right to stay instead of deportations. Welcome instead of fortress Europe. Let us put pressure on it on all levels and with various actions and campaigns. And above all, let us build everyday structures – from the outer borders to the inner cities – that practically resist the politics of exclusion.
In this sense: No one is illegal! Ferries instead of Frontex!
Further information: https://seebruecke-frankfurt.de