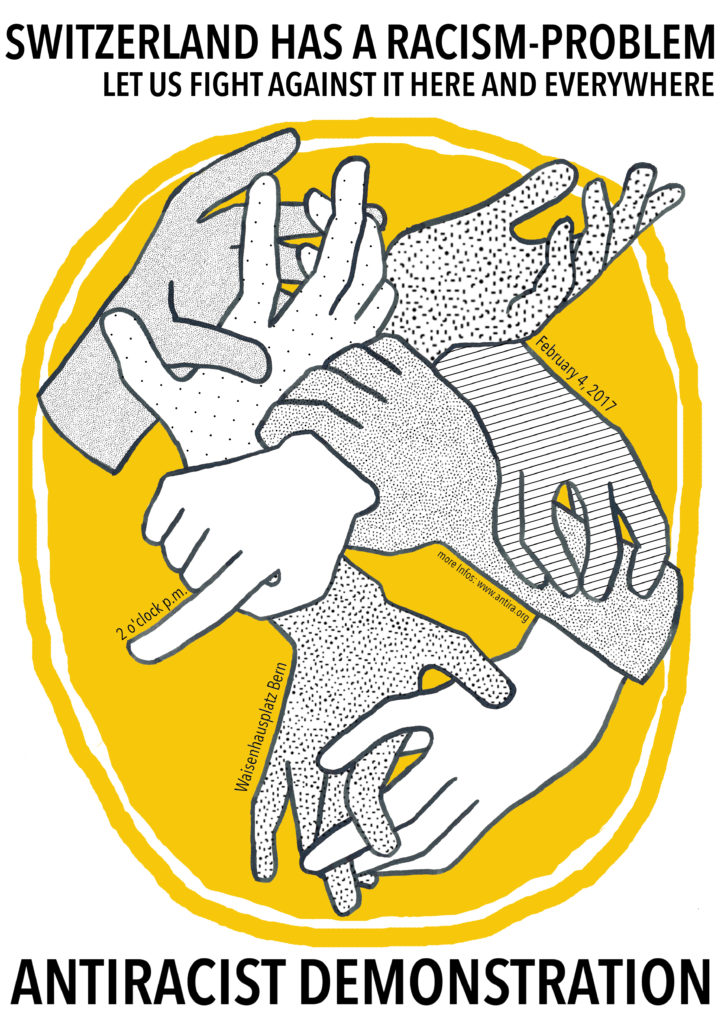 People who emigrate or flee have to react to threats and live under precarious circumstances. The flight routes are dangerous and often fatal because of European policy of sealing itself off. When migrating people arrive here, their hope for a better future ends with forced expulsion to the place where they had to, or wanted to, get away from. The possibility of receiving a right to stay is very small in this racist country. Expulsions are an extreme form of state-led, anti-human violence.

In comparison to „swiss“ people, „migrant“ people are being degraded. For the same work, people without a swiss pass get a lower average wage. In professions with low wages and distressing working conditions, they are over-represented. „Migrants“ have more difficulty to find an apartment. They have less space for living and live under worse conditions. When a neighbourhood is gentrified, „Migrants“ are mostly the first to be displaced. Also in the education- and health-system, they are worse off.

When the police perceive people in the public space as ethnic or religiously „different“, they react with systematic discrimination. Black People and People of Colour are affected above average by identity checks and police violence. That police violence is not colourblind is exemplified by the death of Hervé, who was shot down by the police in Bex (VD). Racial Profiling is a police strategy that is ordered top-down. It is not the individual wrongdoing of some „bad“ police troops rather it pervades state institutions and politics.

The popular petition against mass immigration has consolidated the discrimination of „Migrants“ into the constitution. So-called “Inländer” are systematically treated with privilege on the job market. This racism of favoring natives (“Inländervorrang”) is rarely questioned. Instead it is presented as a means of protection from the negative consequences of capitalism to the so-called “Inländers”. But if one wants to abolish the sickening and competition-stirring aspects of the job market, he or she has to act against the logic of competition and profit, not against migrant people.

Flight and migration are increasing, but fleeing and migrating persons are increasingly met with closed borders. On the border to Switzerland, the Swiss government employs drones and the military. It invests millions each year into Frontex and the militarisation of the external border of the EU. Because of these borders, countless people die in the Mediterranean Sea, freeze to death on the Balkan route or are stranded in Como.

According to the Dublin-system, the Swiss government can deport to European states all people who fled to Switzerland. The Swiss government has only to demonstrate that these people travelled through these countries, when they entered the fortress Europe. In states like Italy or Hungary for example, the asylum rights are not respected and many of the deported people land on the streets. However, Switzerland would be free to renounce Dublin-deportations in the name of „Selbsteintrittsrecht“. Each expulsion is one too many.

Abolish the Dublin-system, liberty of movement and liberty to stay for everyone

People who emigrated are forced to live in camps in Switzerland. Camps are not places of welcome. They are places of racism. Camps are necessary to efficiently administrate the people who fled, to quickly refuse their right to stay and expulse them. The camps are meant to scare-off new arrivals. In Camps, everyday-live is determined by incapacitation, disciplinary measures and isolation.

In European comparison, Switzerland is a forerunner of right-wing populism. Nowhere else were extreme right-wing parties or fascists part of the government and the parliament this early. Right wing politicians launched racist popular petitions that are debated permanently and have become socially acceptable since several years. This long Swiss tradition would not be possible if the open racism of right-wing populism could not build upon the more silent racism of the political middle and the institutions. The racist incitement against muslims during this ongoing voting campaign over facilitated naturalisation is the youngest example for this kind of process.